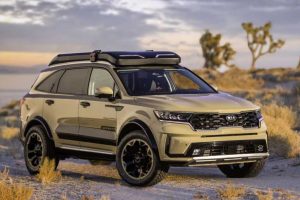 What do the 2021 Kia Sorento and off-roading have in common? As with most car-based crossover SUVs, not much—or at least they didn’t until Kia gave two new Sorentos rugged makeovers. (We figure these two were bound for the SEMA show in Las Vegas that typically occurs this time of year that was canceled in favor of a virtual show due to the ongoing health crisis.) The Sorento Yosemite Edition is here to help you stick your head in the clouds while the Zion Edition is here to crush desert dunes and escape the built up metropolises most of us call home.

Both cars are based off of the Sorento X-Line, an already off-road-styled version of the Sorento, but were beefed up by LGE-CTE Motorsports in San Dimas, CA. The two Sorentos benefit from custom 20-inch gloss black wheels wearing 32-inch all-terrain tires. Their ride heights have been increased to 8.3 inches, making for better ground clearance and better approach and departure angles. Both also get wheel arch extensions, custom skid plates, and brush guards.

The Yosemite edition wears a heavy-duty roof rack with four LED lights built in, handy for packing on all the gear you might need for some high-altitude adventures. The car wears Pine Green paint work. The Zion edition comes with a full-length cargo top for all your camping needs and is finished in a glossy Desert Sand color. So, yes, both are Sorentos with a mild suspension lift, bigger tires, and some adventurous-looking accessories added on—but both look pretty good, and way better prepared for off-pavement excursions than a typical Sorento.

While such off-road playtime isn’t exactly what we think most customers will be doing with their 2021 Sorentos, it’s nice to see Kia let its imagination run wild a bit. Plus, we think the Desert Sand and Pine Green paintwork would make excellent additions to the production Sorento’s color palette. Kia says the two beefed-up crossovers will be shown across the country—though no details on how or when were made available.