Hyundai has rolled out a couple of teaser images of the all-new Hyundai Elantra ahead of its global debut on March 18, 2020. You would be surprised to know that the Elantra or ‘Avante’ in some makets, is Hyundai’s global bestseller model and more than 13.8 million units of the car have been sold around the world since its debut in 1990. Hyundai says that the all-new Elantra is now lower, longer and wider than the current model and has a sporty four-door coupe like design. The car is also built on a new platform as well. The biggest draw is the new design language which Hyundai calls ‘Parametric Dynamics’ theme. What it means is that the new-generation Elantra has this edgy design and an aggressive look thanks to use of parametric shapes and textures. The new seventh generation Elantra will be the first Hyundai to employ this design and we could expect the ‘Parametric Dynamics’ design language to be employed in other cars as well. One of the highlights of the company’s new design language is the fact that three lines meet at one point, which is something usually avoided in car designs. 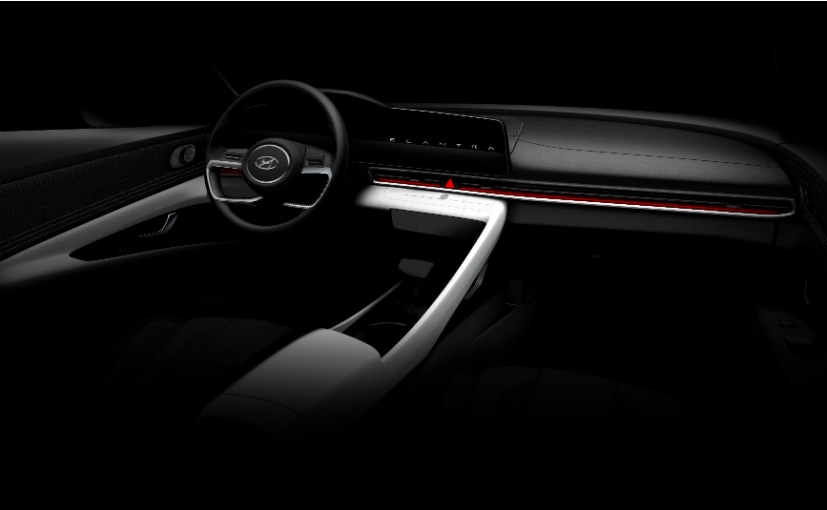 (The cabin gets a completely new design, with a minimalist and a sporty theme)

The pictures revealed give us a glimpse of the profile of the car where you can see the roofline sloping towards the rear and the apparent creases on the bodywork, giving the car an edgy look. It also gives us a hint about the tail lamps with T-shaped LED lights and the dual-tone alloy wheels. The

The sketch of the interior reveals new dashboard design with a minimalist theme. A large touchscreen infotainment system is seen, coupled with the instrument console. The steering wheel is a new unit too and has a sporty demeanour. You could also see the aircraft style gear lever in the middle.

Hyundai did not give out any details about the engine options for the new-generation Elantra but expect it to get a range of petrol and diesel engine options along with a bunch of transmission options as well. We could expect the new Elantra to come to India sometime in 2021, given the fact that the current Elantra on sale was introduced late in 2019.