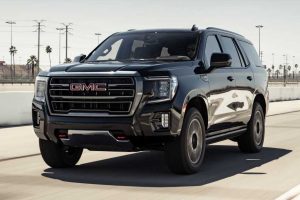 The Sierra pickup truck may be the heart of GMC, but the Yukon has always been the soul. The original GMC Yukon Denali became a pop culture icon soon after its debut for 1999—given as much street cred as its big brother, the Cadillac Escalade. The new, fifth-generation 2021 GMC Yukon attempts to reinject that bit of cachet into the line with an updated Denali and a new-to-the-Yukon AT4 trim, both of which we had a chance to review.

Like the prior four generations, the 2021 GMC Yukon and extended-wheelbase Yukon XL share much with the 2021 Chevrolet Tahoe and Suburban and 2021 Cadillac Escalade and Escalade ESV. But from the curbside view, at least, GMC has successfully differentiated the conservatively styled 2021 Yukon from the edgy Tahoe and Suburban and blocky Escalade, especially in the SUV’s AT4 trim. The updated Yukon Denali takes things a step further, sporting both distinctive sheetmetal and a trim-specific dashboard, leaving the AT4 and the rest of the Yukon line to essentially share a cabin design with the Chevy Tahoe and Suburban.

New GMC Yukon Specs: What You Need to Know

Like humanity, the Yukon, Tahoe, and Escalade are all the same under the skin. Riding on a new hybrid unibody-on-frame platform, with—for the first time in Yukon history—an independent rear suspension, the Yukon grows by 4.9 inches in wheelbase and 6.1 inches in overall length, allowing GMC to significantly increase third-row passenger legroom and cargo capacity (the not-yet-driven Yukon XL gets stretched by 4.1 inches in wheelbase and 0.9 inch in overall length compared to before). Power in our Yukon AT4 test model comes courtesy of GM’s largely carryover 5.3-liter V-8, which makes 355 horsepower and 383 lb-ft of torque. The engine is paired to a new-for-2021 10-speed automatic transmission, relegating the old six-speed slushbox to the cheapest of GMC Sierra pickups. Four-wheel drive is standard on the off-road-oriented Yukon AT4, though all- and rear-wheel drive are available elsewhere in the lineup.

The Yukon Denali shares its powertrain with the Escalade—a mostly unchanged 6.2-liter V-8/10-speed-auto combo with four-wheel drive. Power remains the same as 2020, with 420 horses and 460 lb-ft of torque. For 2021, the 6.2-liter V-8 is exclusive to the Yukon Denali, but we wouldn’t be surprised to see it show up under the hood of the Yukon AT4 in the coming years as the automaker attempts to expand and elevate that particular sub-brand, which stands as the rugged and sporty alternative to the Denali’s upscale pretensions.

Not coming to the Yukon AT4 (but available for the Yukon SLE, SLT, and Denali) is the new-for-2021—and as of yet untested—Duramax turbo-diesel 3.0-liter I-6. The engine and its associated hardware, which makes 277 horsepower and 420-lb-ft of torque, won’t fit in the Yukon AT4 due to its distinct front fascia, which features a nipped-and-tucked chin to boost the off-roader’s approach angle.

Optional and equipped on both our Yukon AT4 and Denali examples is arguably the biggest news for 2021: GM’s new Air Ride adaptive suspension system. Combining electromagnetic dampers with air springs, the new tech blends the ability of the system’s MagneRide dampers to rapidly adapt to various road and drive conditions with the air suspension’s variable ride height and load-leveling capability in an effort to further improve the utility of what’s already an exceptionally versatile SUV.

Despite the models’ different powertrains and use cases, the Yukon AT4 and Yukon Denali drive pretty similarly. Somewhat unexpectedly, though, the Yukon AT4, equipped with the smaller V-8 and the optional Air Ride suspension (but saddled with 20-inch wheels and off-road tires) was the more enjoyable model to wheel around. We’ve never been fans of GM’s 5.3-liter V-8, which in the last-gen Yukon seemed to be better at making noise than increasing forward momentum, but the new 10-speed auto seemingly cures those ills. Its tight ratio spread makes the most of the 5.3’s segment-worst power output and really helps it punch above its weight.

Like a teacher’s pet, the 10-speed always has the right answer (and gear) for the task at hand. The Yukon AT4’s powertrain even handles a trailer well, with a decent amount of passing power on tap and exceptional shift behavior from the transmission when dragging along approximately 4,000 pounds’ worth of Airstream camper. That was about half of the AT4’s 8,200-pound towing capacity.

The Yukon Denali’s big 6.2-liter V-8 is no slouch, either, but at the same time, it doesn’t quite feel as lively as does the 5.3. Part of that, no doubt, has to do with the couple hundred extra pounds the Denali is carrying, but we suspect taller transmission gearing in the Denali may be partially to blame, too. Unless you’re towing heavy trailers regularly, Yukon AT4 buyers needn’t feel like they’re missing out on the 6.2-liter V-8.

When it comes to ride quality, the Yukon AT4 gets the slight edge on its big brother, while the Denali scores points back for handling. Both Air Ride-equipped Yukons are prone to transmitting more impact harshness into the cabin than expected, but aided by its smaller 20-inch wheels and cushier tire sidewalls, the AT4 dispatches the rough stuff a bit better. The Denali, riding on optional 22-inch wheels, has a tendency to find bumps and rough patches the AT4 doesn’t notice. Although its off-road-oriented tires help improve the Yukon AT4’s ride quality, the taller rubber also hurt its steering feel, which is direct but numb. The Denali, on the other hand, is pleasantly competent on a good road when in Sport mode, with quick, progressive steering, good feedback, and minimal body roll.

With no added power but some added weight, it wasn’t surprising to see where the test numbers fell when we hooked the Yukon AT4 up to our gear at the test track. The new Yukon AT4, weighing in at 5,912 pounds, fell just behind the pace of the last Yukon we tested, a 5.3-powered 2015 Yukon SLT 4×4 weighing in at 5,633 pounds. The new Yukon accelerated from zero to 60 mph in 7.2 seconds and through the quarter-mile in 15.5 seconds at 90.6 mph, whereas the old model needed 6.9 seconds to hit 60 mph and 15.4 to clear the quarter-mile at 90.0 mph.

Our 60-to-0-mph braking test took 129 feet for the 2021 Yukon and 125 for the 2015 model. (For the record, the brakes on both Yukons we evaluated felt wooden and stiff, with little initial bite.) Thanks to a stability-control system that isn’t fully defeatable (a rarity in a GM), the new Yukon also performed worse than its predecessor on the figure eight; it lapped our course in 30.6 seconds at 0.51 g average, versus 27.5 seconds at 0.65 g. We’d expect a non-AT4 5.3-powered 2021 Yukon to improve by a second at most on the figure eight, and remain steady in the zero-to-60 and quarter-mile tests. Similarly, we haven’t yet tested the Yukon Denali, but we’d expect it to shed about a second from the AT4’s acceleration and handling results.

What’s the GMC Yukon’s Interior Like? How’s Its Cargo Space?

The new Yukon’s interior is a significant step up from the fourth-gen model, but that’s not to say there isn’t room for improvement. First the good: It’s positively enormous. The new Yukon is the first of its kind to comfortably fit adults in its third row. It’s also the first to successfully fit passengers in the third row and a substantial amount of luggage—in this case, four airline-friendly rollaboard bags (done without stacking the bags on top of each other, too).

As far as design goes, the Yukon Denali’s is more successful than the AT4’s. With cross-stitched baseball-glove-like leather, ash trim that’s as nice to touch as to look at, and a remarkably crisp high-resolution infotainment display, the Yukon Denali mostly feels the luxe truck that it is. Because the Denali makes up the bulk of Yukon sales, GMC decided to make its dash design exclusive, leaving the rest of the Yukon line (including the AT4) to share most of its cabin with the Chevy Tahoe and Suburban lineup. We think that was probably a mistake. Despite the addition of aluminum trim, acoustic glass, and GMC-exclusive upholstery patterns, the Yukon AT4’s cabin doesn’t look or feel noticeably higher-quality than the less expensive Tahoe and Suburban Z71 models we also had on hand for evaluation. GMC notes Yukon customers don’t cross-shop with Chevrolet, but that doesn’t mean the two SUVs shouldn’t be compared.

Despite the Yukon Denali’s unique dash, both it and the AT4 still share far more with the Tahoe line than they ought to. Switchgear, for instance, on the Yukons is identical in both placement and quality to the Tahoe line. Worse, the Yukon shares the Chevy SUV’s shotgun approach to button placement. We wish some thought—literally any thought—was put into how and where the Yukon’s controls were placed. Tailgate, sunroof, center console, and seat buttons, for instance, are on the ceiling. Drive modes, 4WD selector, headlights, heads-up display controls, start-stop, parking—basically everything else—is haphazardly placed to the left of the steering wheel, below the driver’s eye line. The most annoying part is that the headlight, drive mode, and suspension height knobs are literally identical (they’re actually repurposed HVAC knobs, but we digress), and so if you’re trying to adjust drive modes by feel—like to switch into Sport mode, for instance—there’s an equal chance you’ll turn your headlights off, or raise the suspension instead.

Pricing for the 2021 Yukon doesn’t change much from past years, with the SUV’s base price rising just $100 to $51,995. Yukon Denali prices don’t shift much, either—rear-drive models start at $69,695, a $700 increase versus last year. The Yukon AT4 starts at $66,095. All-wheel drive is a $3,000 extra on all trims but the AT4, where four-wheel drive with a two-speed transfer case is standard (the Denali can be had with rear- or four-wheel drive, while four-wheel drive can be added to all-wheel-drive-equipped Yukon SLE and SLT models by adding the $565 Max Trailering package). The long-wheelbase Yukon XL adds another $2,700 to the GMC’s list price.

The as-tested price for our loaded Yukon AT4 was $76,155, whereas our loaded Yukon Denali with 4WD stickered for $84,720. It bears repeating: An identically equipped (save for the sheet metal) Chevy Tahoe Z71 can be had for $4,320 less than the Yukon AT4, while a Tahoe High Country equipped similarly to our Yukon Denali tester can be had for $81,840. Also worth pointing out: An Escalade equipped similarly to our Yukon Denali tester will set you back $96,545.

Although more separates the Yukon lineup from its stablemates than ever before, the buyer unafraid of cross-shopping both in-house GM brands and rival automakers may find a better value elsewhere. That being said, the 2021 Yukon is the most convincing effort we’ve seen from GMC in quite a long time. It remains to be seen whether the new Denali and AT4 can capture the public’s imagination in the same way the original Yukon Denali did more than two decades ago, but the fifth-gen model is certainly a step in the right direction.