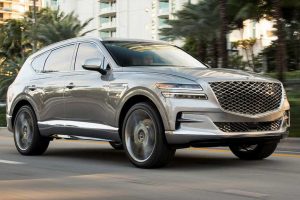 We know just everything there is to know about the 2021 Genesis GV80 ahead of its release this fall. After learning about its engines, interior, and pricing, one of the few remaining pieces of the puzzle has finally been found: the crossover SUV’s fuel economy. Based on information gleaned from the Environmental Protection Agency’s website, it looks like the midsize model will achieve solid fuel economy figures.

The 2021 Genesis GV80 tops out at 21 mpg city, 25 mpg highway, and 23 mpg combined with its standard turbocharged 2.5-liter four-cylinder engine. This mill produces 300 hp and 311 lb-ft of torque. Fuel economy numbers are similar for both rear- and all-wheel-drive versions. On the latter, however, the combined rating falls to 22 mpg.

With these numbers, the GV80 remains competitive with rivals such as the BMW X5, Lexus RX, and Mercedes GLE, all of which top out at 23 mpg combined (discounting any hybrid variants, that is). However, the Volvo XC90 nets 25 mpg combined in its most efficient non-hybrid form. On the other end of the spectrum, the Audi Q7 trails behind with a combined rating of 21 mpg.

We drove a Korean-spec GV80 earlier this year and praised its comfortable seats and stylish interior. Although it wasn’t exactly aligned with the vehicle we’ll see here in the United States, it still impressed us with smooth braking and well-centered steering. Like many midsize three-row SUVs, the GV80’s third row is a tad too cramped for our taste.