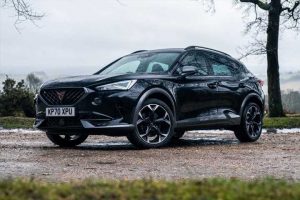 New 310hp crossover is designed to deliver where it counts. Time for an in-depth review…

While the Cupra marketing department would have us believe the Formentor is its first all-new vehicle, the car is based on a very familiar recipe – and concept. It is for anyone after a well-equipped, practical, powerful crossover, which, we're often told, is virtually everyone. Using an omnipresent mix of MQB underpinnings and EA888 firepower, the Formentor gets off to a choreographed start, with a 310hp from its turbocharged four-cylinder, an adjustable chassis and a cabin featuring a bespoke (for now) infotainment system alongside leather and premium plastics.

The Formentor doesn't aspire to the traditional SUV class – it has an all-wheel drive system with a trio of off-road modes, but they’re distinguished by software code alone. Cupra makes no bones about the road-biased approach. Predictably it claims the car possesses sufficient handling verve to satisfy driving enthusiasts while also providing a commanding view of the road ahead for the family buyer. It’s hard not to think of it as a Golf R on stilts – or indeed a more expensive alternative to the already worthy Ateca – but Cupra argues there’s much more to its Formentor than that. Time to weigh that claim.

Alongside heightened performance, it is design brio that is intended to distinguish Cupra product from anything SEAT-badged. With its bespoke styling, the Formentor obviously launches the brand into new territory, and it has doubled down on its premium placement by ramping up the standard kit on offer. Technically it's nothing we haven’t seen before, but each feature – whether it’s the more interactive 12-inch infotainment front end or touch-sensitive heating controls – are all specific to the Formentor. Or at least they are for now. It means the cabin feels bang up to date.

It's likely cost-efficient, too, because the hardware behind it all is ubiquitous VW Group stuff. The menus of the standard-fit 10.25-inch digital instrument cluster are a dead giveaway, along with the compact gear selector and switchgear redolent of the Mk8 Golf. Not a bad thing, of course, and the new interface is pleasing enough – but this is obviously not a 'bespoke' product in the way say a Bentley is. It's an expert tweak of a tweak.

This means that some of the same foibles remain. The Formentor can be fiddly to operate, particularly on the move. Swipe controls for the climate control and volume are still not ideal – especially when they're not illuminated at night. Be prepared to unintentionally cook/freeze yourself. No doubt an owner would get used to the operation with time, but they’d also probably never stop wanting a conventional dial either.

The fit and finish, though, are generally blameless. The leather trimmed seats provide good comfort and allow for lots of adjustment, and will descend surprisingly close to the floor if you wish. There’s lots of room in the back row, and two USB C ports for rear passengers to add to the two provided up front, alongside wireless charging and Bluetooth-connectable Apple Carplay. You also get a heated wheel, seats and mirrors as standard. Out back, the load height into the boot is practical, and there’s 420 litres of easily accessible space with the 60/40-split seats up. That’s 28 litres more than the taller Volkswagen T-Roc R.

The Cupra gets a 310hp variant of the 2.0-litre EA888 motor that you'll find in umpteen other places. Ditto the seven-speed DSG. It dispenses a familiar amount of performance: maximum power arrives at 5,450rpm and doesn't stop giving until 6,600rpm, while torque peaks at 295lb ft from 2,000rpm to 5,450rpm. Volkswagen has tweaked the unit for yet more power in Golf colours, but it remains one of the most tractable four-cylinder motors you can buy anywhere.

The transmission is hard to fault in auto mode; it hangs onto a higher cog for fuel efficiency but is also very quick to drop a gear or two when you press the accelerator down harder. Thanks to a seemingly endless supply of traction, you can continue doing this until your foot finds the bulkhead. The Formentor feels every bit the 4.9-second to 62mph car it is claimed to be. Naturally, it's possible to manually shift the gears if you prefer, thanks to pleasingly long wheel mounted paddles – but the setup is so smart as is that there’s no technical advantage in doing so.

Under power, the EA888's refined four-pot tone is easily recognisable and the soundtrack can be cycled through Comfort to Cupra modes. You can switch off the synthesised fakery if you prefer (it isn’t actually that offensive) even when the engine and gearbox are set to their most aggressive modes, but the Formentor is not intended to dispense barks and bangs anyway. You can only just about make out the exhaust system clearing its throat on a lifted throttle. And there's a good reason for that.

If you thought Cupra might start building more extreme models as a way of elbowing itself some room in a crowded market, think again. The compromise delivered here is intended to offer its new customer an accommodating sort of handling talent. In Comfort mode the car rides well on its 19-inch wheels, with admirable bump absorption – and if that's not good enough, the latest adaptive suspension system offers a sliding scale of adjustment for you to get to grips with.

Regardless, most will likely settle for the softest setting in the UK. Body control is decent, there’s a satisfying amount of roll on turn in and a very noticeable loading of chassis at speed. Shocker: it’s like a Golf R, only from a slightly higher vantage point. Perhaps more surprising is just how cohesive the crossover seems if you're determined to go looking for its handling limit.

The Formentor's front end is positive enough, and you'll sense when the tyres begin to scrub if you're too aggressive with the quick steering. But there's sufficient neutrality plumbed in for it to tuck in on a trailed brake and Cupra has done a fine job judging both the brake pedal and the steering feel. It speaks volumes that the manufacturer will permit you to switch off the stability control, and that there is a sufficient level of driver interest to ponder doing it. Although even if you never go near the button, the Formentor is an easygoing and fairly intuitive steer.

At £39,830, Cupra’s first standalone model is priced competitively, but not cheaply – as you might expect from a brand intended to take SEAT upmarket. It’s right up there with the T-Roc R, although with so much standard kit onboard it'll likely appear better value on paper. Our test car came with one option, £555 of metallic paint, so as it stands it costs £40,385. The last T-Roc R we tested was specced to £41,699. Admittedly that’s not a big difference, but it means that most Formentors will emerge from the factory in fine fettle. And that matters for anyone after a quick purchase or PCP deal.

Running costs certainly won’t be anything startling; we saw economy in the mid to early thirties during our loan, which makes the WLTP quote of 36.6mpg seem realistic enough. As for tax, 175g/km of CO2 means a first-year rate of £850, but then it drops to £150 per annum after that. The Cupra’s sub-£40k list price is important because it means the car undercuts the UK’s pricier brackets – so the gap to the likes of Porsche’s Macan (which starts at £47k in Britain) is even wider than it looks. While there’s nothing particularly standout about all of that, it arguably positions the Formentor where it needs to be.

In some respects, the Formentor flatters to deceive. For an 'all-new' model, there is precious little new about it. But it is generally all-good, regardless. Cupra has done a fine job of judging the car for its chosen segment: the performance is strong, the handling robust and there's a sense of VW Group dependability about everything else. Moreover – and possibly crucially – the Formentor abounds with mainstream-pleasing details; the light bar, the big grille, the subtle nod to easy access ride height. It'll likely look good in showrooms.

The interior is a pleasant place to be once you’ve figured out the infotainment system and setup everything to how you like it. The car's capacity for smoothing out B-roads while effortlessly hammering up a motorway is going to earn it plenty of fans; that it'll also make a fair fist of getting you around a corner with purpose is probably less significant, but it's another feather in the Formentor cap.

Doing none of these things to a class-leading standard is unlikely to hinder it either. No rival crossover has it nailed across the board, and while the dynamic standard continues to rise, none are guaranteed to set your hair on fire in the same way a top notch hot hatch or fast estate would. But you already knew that. The Formentor is plenty good enough to make waves. Which is precisely what Cupra needed it to be.