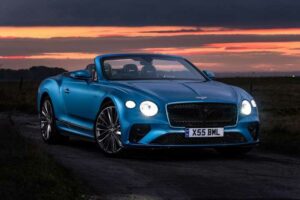 Lead images like the one you see above should probably come with a health warning. Car photography isn’t subject to quite the same level of post-shoot chicanery as fashion modelling – but inevitably there was much moving of lights and more than a little mouse clicking to make the Bentley Continental GT Speed Convertible pop like that against a darkening sky. In person, the scene was a little less glamorous. So much so that I spent most of the week sitting on the fence when it came to the car’s styling. Which hardly seems credible if you’ve spent the last few moments drinking it in.

This likely has more to do with my preference for the coupe than a real dislike of the drop-top. Much as it does with the Audi R8 or the Aston Martin Vantage, the tail-meeting roofline is at the root of what makes Bentley’s fastback so beguiling to look at. With it intact, there is no denying the latest model’s position as arguably the world’s most desirable, and usable, two-door Grand Tourer. Without it, you’re left with a very large and less well-proportioned four-seater. And a disappointing boot.

Poor weather obviously does it no favours. I remember being much more partial to the GTC when Bentley launched it back in 2019. Of course, that was in Spain, where the sun shone gaily till 9pm, making the fabric hood only slightly more useful than a parka jacket. The new Speed is effectively the replacement for that earlier W12-powered car, and on paper it has much going for it. Probably fed up of hearing how scintillating the (cheaper) V8 GT is, Bentley has thrown the kitchen sink at the flagship version. As Matt B noted when he drove the coupe recently, you get four-wheel steering and electronic limited-slip rear diff for the first time, which makes for a vastly sophisticated prospect when you consider that the Continental already boasted three-chamber air springs, active anti-roll bars and adaptive all-wheel drive.

Naturally you also get more power, although you won’t necessarily dwell on that fact too much. After all, 659hp is not a whole heap lot more than 635hp, especially when torque remains unchanged at 664lb ft – and the latest convertible weighs in at 2,436kg. The old GTC would do 0-62mph in 3.7 seconds and go on to 207mph; Bentley says the Speed will do it 3.6 seconds and 208mph. So we’re not talking about a revolution in terms of performance. Nor is it a definitive step forward in refinement either. Admittedly it is only the very choppiest UK roads that cause the A pillars to faintly bridle at the roof’s absence – but when they do, you’ll probably wonder at the logic of choosing the less good looking, slightly wobblier and more expensive convertible. I did.

So it’s a good thing the week didn’t end there. Because much later, away from Harry and his camera, the sun came out. And rather than doing it under protest, the roof came off voluntarily. Which does rather make all the difference. Because without an icy Oxfordshire gale blowing around the cabin, it’s much easier to recall why the old GTC had seemed like a very fine thing indeed. Primarily that is to do with the familiar suety goodness of being in a terrifically well appointed and fabulously fast open-air Bentley without anything more pressing to think about than lunch. This, I’ll warrant, is the leisurely way that many if not most GT convertibles are deployed by their owners, and honestly there are few better places to wallow in England’s autumnal glow.

The other reason is that the Speed is appreciably better than the W12 model which preceded it. The GTC was very pleasant to drive in a benign, and very self-assured sort of way. But there wasn’t too much reward to be had from throwing it at corners like you were Rhys Millen. This version, as you might expect, is in superior command of its dynamic faculties. Not in a way that makes you completely forget that it weighs about as much as HMS Belfast, but sufficient to make you feel markedly more invested in what’s going on. This is important, because it means you’re inclined to delve deeper and more consistently into W12’s mighty reservoir of power – and when you do this, the convertible comes alive in a way that belies its size.

Again, we’re not talking edge-of-the-envelope stuff. The rag-top weighs 163kg more than the coupe, after all, and Bentley knows only too well that it is indulging a different sort of customer. Even on 22-inch wheels, the Speed prizes your comfort over ferocious direction changes, and that’s exactly as it should be. But the compromise between the two – never poorly struck before – is now on another level. It is revealing that even the firmer ‘Sport’ mode will let you nonchalantly thwack cat’s eyes before getting you turned in neater and flatter and happier than the GTC ever managed. As Bentley promised in the build-up to the Speed’s introduction, it is about doing much the same thing as before, only better.

The additional tech plays a prominent part. Four-wheel steering, particularly in tight corners, is no doubt helping to make the GT seem less nose heavy as you canter up to an apex, just as the new diff is beavering away to cater for a tidier exit. None of extra agility this seems intrusive or overly wrought, even if you’re under no illusions that the car is endlessly pulling computational rabbits from its hat. Obviously you can forget about feeling connected to the road surface in a matter-of-fact, hard-nosed sense – but nor are you entirely isolated from it either. In its default ‘Bentley’ setting, the Speed endeavours to make it seem like you and it are cosily hunkered down for business, even while the air suspension is slyly mopping up the kind of high frequency intrusions that confound most other cars equipped with low profile tyres and more than 650hp.

Of course this doesn’t alter the fact that anyone searching for a GT Speed in the truest sense will be better served by the coupe. For all its enhancements, it is still difficult to imagine driving the convertible much beyond seven-tenths on the road. It is too big and blustery and belatedly aware of its own inertia for that. But for most of the time, in most situations, that hardly matters. Bentley’s triumph is in delivering a car which is so unmistakably nicer to drive up to that point. Keep in the right frame of mind, with the roof down and the sun shining, and with nowhere in particular to go, and it’ll hardly occur to you to think about the coupe’s sleeker, speedier way of doing things. I didn’t.