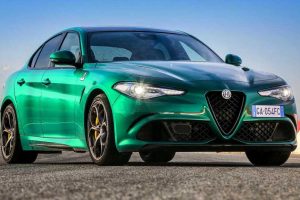 If you’re in the market for a new Alfa Romeo Giulia or Stelvio, we’ve got some good news. For 2021, Alfa Romeo revealed a mild restructuring of both trims and standard content across the range, with new colors thrown in for good measure. Let’s take a look.

Where before there were seven disparate trims for both the Giulia sedan and Stelvio SUV, there are now only four, with the base-level trim evocatively renamed “Sprint” for both; the Sport and Ti Lusso trims have been axed from the hierarchy. Aside from Sprint, buyers have the choice of Ti, Ti Sport, and 505-hp Quadrifoglio iterations on both the crossover and sedan.

If you slide into a Stelvio Ti or Giulia Ti, you’ll find a standard dual-pane sunroof and 8.8-inch infotainment display. The Ti Sports incorporate a standard limited-slip differential and darkened exhaust tips, and the Stelvio Ti Sport wears a more aggressive rear diffuser and 20-inch wheels, with new 21-inch wheels now optional on the Stelvio Ti and Ti Sport.

Regardless of whether you pick Stelvio or Giulia, the Ti trim is available with a features-oriented but as-of-now undefined Lusso package that presumably brings the Ti up to spec with the now discontinued Ti Lusso that added more refined upholstery and trim. Finally, a similarly unexplained Carbon Package for the Ti Sport likely adds a host of carbon fiber trim and tinsel. Once you pick your trim, you’ve got four new dramatically named colors to decide from, including Ocra GT Junior, Rosso GTA, Rosso Villa d’Este, and Verde Montreal.

As expected, pricing is revised as well, with only minor increases compared to the 2020 model year. The Giulia Sprint starts at $40,745, and the Stelvio equivalent opens at $43,045. All-wheel drive is standard on the Stelvio Ti, Ti Sport, and Quadrifoglio, whereas it’s a $2,000 premium on all Giulias save the rear-wheel-drive-only Giulia Quadrifoglio. If this sounds fine and dandy, hustle on down to your local Alfa dealer, where the automaker says the updated lineup should already be on showroom floors.