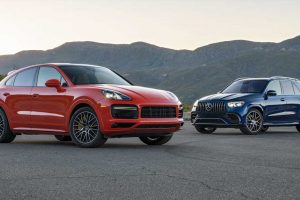 For decades, Porsche has established the benchmark in many (if not all) vehicle classes that it competes in. From the 911 to the Macan, every Porsche is known for its superior handling, body control, and finesse. The Porsche Cayenne is no exception. Since its inception in 2003, the Cayenne has proven naysayers wrong, winning comparison tests and even MotorTrend SUV of the Year. Now, as a new generation emerges, the Cayenne is once again making some noise.

The Mercedes-Benz GLE has had a lot of the same success as the Porsche (its predecessor, the Mercedes ML, won Truck of the Year in 1998), but it’s never been a segment standout like the Cayenne. That doesn’t mean it’s far behind, though. As the line’s highest performance variant, the Mercedes-AMG GLE 63 S’ main job is to deliver the same thrills as its go-fast car siblings. Although its bigger and heavier body complicates that task somewhat, we’ve recently seen great things from the performance brand of the three-pointed star, and this AMG arrives at this fight well prepared.

With coupe bodywork upping the Porsche Cayenne Turbo’s sporting credentials and the AMG GLE 63 S delivering an eye-popping 603 hp, we had one question in mind: Which is the sportiest SUV on offer from Stuttgart?

Sporting a 4.0-liter twin-turbo V-8 engine under its hood, the Mercedes-AMG not only produces 603 horses, but it also delivers 627 lb-ft of torque to all four wheels. Contributing to the GLE 63 S’ brisk acceleration (but not its peak output figures) is a battery hybrid system with an electric motor that generates 21 hp and 184 lb-ft. This system also allows the engine to shut off and cruise using electric output only. A nine-speed automatic is in charge of sending that power to all four wheels.

The AMG GLE is a looker from every angle, though it’s hard to differentiate it from the non-AMG GLE. Besides its badges, grille, and quad-tipped exhaust, there are virtually no other aesthetic differences from its mainstream sibling. A big difference, however, is its price; at $133,075 as tested, the AMG GLE is a special SUV.

On the other hand, the 541 hp and 567 lb-ft that the Porsche Cayenne’s 4.0-liter twin-turbo V-8  develops should be more than enough for an SUV this size. Yet the 62-hp and 60-lb-ft difference with the AMG is significant. An eight-speed automatic transmission delivers that power to all four wheels, and the Pirelli P Zero tires are in charge of providing all the grip needed to control its 5,500 pounds.

And although its 911 siblings are handsome, the Cayenne Coupe’s styling could be polarizing to some. Like senior features editor Jonny Lieberman said, “You ain’t buying a Cayenne because it’s nice to look at.” Crossing the checkout counter at $158,460, this Porsche wants to continue to be the benchmark of all performance SUVs.

On the Road: Which German Does it Better?

There’s hardly a better setting for this comparison than Angeles Crest Highway. Located in the northeastern mountains of Los Angeles, ACH is one of the best roads in the world. With its hundreds of corners, steep slopes, and (usually) low traffic, there’s hardly a better stage for performance models. Best of all? It’s right in our backyard.

Right away, the Porsche feels like it was developed to be driven on ACH. Its suspension, steering, and low body roll make the Cayenne shine on every corner of this mountain road. “The ride is incongruously good, all the way up to Sport+,” road test editor Chris Walton said. “Porsche knows how to tune dampers and springs. Even in midcorner dips, it never lost its line.”

Everyone knows Porsches handle fantastically well on twisty roads, but it’s hard to deliver the fun driving dynamics of its two-door cars in an SUV. The Cayenne, however, does it very well, allowing the driver to push it hard and pleasing everyone—from the hardcore enthusiast to the casual driver. “It’s engaging, it challenges, it pushes you—it’s a Porsche through and through,” features editor Christian Seabaugh said. After driving it up and down Angeles Crest, almost all the judges agreed that the Cayenne feels like a bigger 911. Its chassis is composed, the engine delivers sufficient power, and the transmission (which is not a PDK) is so well tuned and quick that you almost feel like you’re driving a PDK. The experience behind the wheel is hard to match, let alone surpass.

The Mercedes, on the other hand, feels like the cheetah of SUVs—it’s fierce, fast, and muscular. “Power and torque and then more power and more torque,” Lieberman said. “News that shocks no one: AMG makes big, strong engines.” The AMG makes the Cayenne feel underpowered, but not everything is about numbers or straight-line performance. It’s easy to tell that Mercedes took a page from the AMG GT roadster and applied it to the GLE 63 S. The SUV reminded us of the two-seater we had just driven on the same roads a few weeks back.

Unfortunately, the AMG GLE we had in for the comparison had a couple of computer glitches due to its pre-production build status. During some runs up and down the mountain, the stability control system would cut power randomly—sometimes applying the brakes in a corner. Although this happened to a couple of editors, some of us didn’t get to experience the true AMG performance we’re used to seeing. However, when the AMG’s computer cooperated, the SUV delivered. “I really sensed the AMG GT roots with that motor and transmission,” Walton said. “Even the steering was reminiscent of the GT’s. How is this possible in an SUV?”

Excellent body control, confident steering, and infinite power are all traits of the AMG. The air suspension is calibrated to reduce body roll and absorb most of the imperfections on the pavement. The steering was nicely weighted, though Seabaugh thought it felt a bit digital. And while the AMG excels in ride quality, its transmission calibration needs work. Sometimes it took too long to downshift, and it upshifted too early, even in Race mode.

The Porsche feels more controlled and natural in corners, it’s tuned to feel sporty, never too soft, and its steering is perfectly balanced to feel everything that’s happening on the road. The AMG is punchier but doesn’t feel as refined as the Porsche in all the other categories. Seabaugh summed it up well when he said, “The Mercedes is technically capable but ultimately soulless.”

Who has the Better Cabin?

The two brands approach their interiors in different ways. The Mercedes looks more technologically advanced with its massive displays. The Porsche’s cabin is more subtle, yet it has the all technology you need, including its own version of VW Group’s Digital Cockpit. It seems like Mercedes invested more in the interior than Porsche, adding dollars to make the cabin more amicable and plusher.

The AMG’s clean and elegant cabin stands out with its hidden buttons and organized look. A sole strip of buttons located below the air vents makes the interior look premium, and the combination of real wood with the beige and black leather feels a step above the Porsche’s all-black interior. The Cayenne’s center console houses all of the buttons—from the A/C controls to controls for the shock stiffness and infotainment system. This location isn’t ideal, but you get used to it in a few days. Still, the overall look and feel of the Porsche’s cabin isn’t as inviting as the AMG’s.

We prefer the Porsche’s infotainment screen, which is easier to navigate with simplified menus and a touchscreen. The Mercedes gets more complicated with its MBUX system, which requires the driver to use a touchpad to get around. Although it’s not as hard to use as other touchpads (think Lexus), it’s still a touchpad. However, the materials found in the Mercedes felt superior, including the full leather seats (Porsche uses leather with cloth inserts). The Cayenne’s Alcantara-wrapped steering wheel, however, feels superior to the AMG’s leather and Dinamica microfiber wheel.

Some comparisons are very hard to call. This one, however, was quite easy. The Porsche Cayenne trumped the Mercedes AMG GLE 63 S. Porsche took the 911’s formula (our 2019 Best Driver’s Car) and applied it to the Cayenne, and the result is an SUV that handles fantastically well. It’s easy to drive and lets the driver push it hard. It likes to play on mountain roads and takes freeway drives comfortably.

The AMG GLE 63 S sparks emotion with its powerful engine, but the issues with the computer and the transmission tuning held it back from getting the gold. Still, its air suspension does a great job controlling the body, and its fancy interior keeps occupants comfortable. However, it lacks the handling and finesse that the Porsche delivers in terms of chassis control, steering, and suspension.

Stuttgart maybe the home of these two brands, but the Porsche Cayenne reigns as its SUV champion.