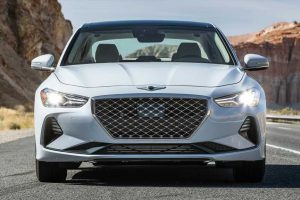 Chapter 3 of the automotive journalists’ handbook specifies that any time a luxury car brand launches a new compact sports sedan, we must engage in endless handwringing as to whether said car is better than the BMW 3 Series.

It doesn’t matter if the current 3 Series is any good. It is. It’s just not great. Times have changed; in the good ol’ days, 3ers were indomitable, with zingy engines, sharp handling, and a firm but compliant ride. Now, they’ve become a bit heavy, the handling a tad loafy, and the ride a bit severe.

As we found with our previous Car of the Year-winning Alfa Romeo Giulia, BMW’s titan is vulnerable to new challengers. So when Hyundai’s Genesis luxury arm rolled out its G70 compact sedan to compete against the Bimmer, executives channeled the words of Lloyd Christmas: “So you’re telling me … there’s a chance?”

Yes, indeed. And as our comparison tests have shown, the G70 is a better 3 Series than the 3 Series. At least in terms of how purists remember the era of the great E30, E36, and E46: The G70 is nimble, sharp, and thrilling, with rorty acceleration in its turbocharged V-6 trim.

But what is it like to live with a Genesis? In our 15 months and nearly 17,000 miles (thanks to the pandemic for chopping back our road trips), we found the G70 to boast a clear vision of what it means to be a compact luxury sport sedan. Our staff came to know the Genesis as a favorite long-hauler for its composed suspension and graceful manners that made long distances evaporate. And its sleek styling drew plenty of second glances and inquisitive questions from people who encountered it.

However, a lack of grip from the Michelin Pilot Sport 4 255/35/ZR19 tires often meant the 365-hp, 376-lb-ft powertrain overwhelmed the rubber, resulting in wheelspin and traction control intervention. That may be fun when exiting a closed-course corner, but entering a heavily trafficked boulevard required a less firm right foot until things settled down.

Although it might be a while before we commute consistently again, the Genesis’ smart cruise control system is among the industry’s best at gauging following distance and the initiation of slowing down, stopping, and re-engaging with city traffic. However, features editor Scott Evans noted its smart cruise is less capable on open freeways prone to surging speeds—often nervously late to engage the brakes for stopped traffic.

We are big fans of the G70’s user interface and user experience of the Hyundai-derived infotainment system. Intuitive, logical, and clear, the G70’s willingness to bounce between CarPlay, satellite radio, and the Genesis’ excellent native maps/traffic app won our hearts. The integrated screen is a bit small, but we’ve heard rumors that it will get larger for the 2022 model year.

The G70’s interior refinement shows a confident brand; the toggles, switches, stalks, dials, and knobs all feel premium and high-quality. The cross-stitched leather seats were lovely for long drives, though I personally could never get a “just right” setting for lumbar support. #FirstWorldProblems.

Unfortunately, the feeling of quality did not extend to our vehicle’s build. Almost immediately, the G70 had some transmission and turbocharger woes, requiring replacements of entire units. Then we discovered the windshield wipers were reverse-installed on the assembly line. Derp. From a brand listed atop J.D. Power’s quality index, our particular unit looked markedly out of place.

Thanks to Genesis’ complimentary three years of maintenance, we had two minor services performed gratis. Our only out-of-pocket cost was $989.96 for a set of tires after the right-rear rubber developed a chunking problem. For some context, we spent $469.55 on two services for our long-term 2018 Alfa Romeo Giulia and $561.36 on two oil changes and inspections for our long-term 2017 Audi A4 2.0 Quattro.

Is the G70 a good value? Given that you cannot get into a German compact sedan with a six-cylinder engine without spending well north of $50,000, the G70 is a tremendous bargain in the dealership. The G70 3.3T base price at time of loan was $44,745—to which we added the Elite package (rain-sensing wipers, parking sensors, wireless charging pad) that brought the final tally to $46,495.

And this was not some stripped-down model, decontented to get an enthusiast into the six-cylinder engine upgrade. Among the standard features of the 2019 G70 3.3T, start with heated and ventilated front leather seats with 16-way adjustment and four-way lumbar support. (The passenger seat gets a 12-and-four adjustment pattern.)

Sounds like a screaming deal, right? Well, it is, on the front end. Unfortunately, the G70’s value story ends there.

MotorTrend‘s vehicle valuation subsidiary, IntelliChoice, predicts three-year retained value at a middling 62 percent for a G70 with 42,000 miles on it. What’s more, depreciation is only one element of cost of ownership, and when factoring in items like fuel costs and insurance over a five-year ownership period, the G70 3.3T ranks Poor for the 2019 model and Mediocre for the 2020 model, according to IntelliChoice. By contrast, a 2020 3 Series ranks Excellent.

“A bang-for-your-buck transaction does not take long-term costs into account,” IntelliChoice’s Debbie Eldridge said. If you are willing to step back to the base 2.0-liter turbo-four, however, IntelliChoice’s long-term value rating improves to Good.

One reason why: Our G70’s playful 3.3-liter twin-turbo was thirsty. Despite the many, many freeway miles we put on it, the G70 averaged a disappointing 20.1 mpg during its year in service. We spent $3,258 for 831 gallons of gasoline.

As you may have read in the G70’s final long-term update, the Genesis marque’s plan to use virtual dealerships (as in, everything involving the customer happens out of sight while a secret nearby Hyundai dealership makes the sausage) fell apart with COVID ruining the idea of concierge service.

That’s right, Genesis has no stand-alone dealerships. Yet. Some people care about hanging out in plush waiting rooms; apparently Genesis thinks its buyers will, too, as it has plans for a network of Taj Majals. Dealers are going to start turning shovels on those projects by the end of this year, with the first showrooms opening in 2022. But in the interim, it means fighting for service space alongside Elantras and Sonatas going in for their 120,000-mile appointment.

Is that a luxury experience? A cadre of marketing consultants will no doubt gladly bend your ear discussing the definition. Regardless, the G70 makes a strong case that Korea’s first premium automotive brand has truly arrived on the scene.