2006 Honda City AC issue: Compressor turning on & off within seconds 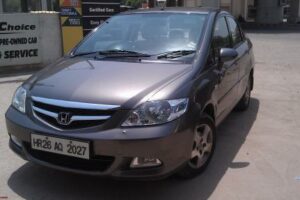 A few days ago, I observed that the AC compressor started and then stopped after maybe 5 seconds, and then started within 5 seconds and so on.

BHPian guptavis recently shared this with other enthusiasts.

A few days ago, I observed that the AC compressor started and then stopped after maybe 5 seconds, and then started within 5 seconds and so on. The air from the vents was only slightly cool and was basically useless in this summer heat. I checked by hand and found the suction pipe got cool and the condenser pipe got hot when the AC keeps cycling like this. I searched on the internet and found low AC refrigerant to be a common cause for this.

I showed it to a local car AC shop (works only on car AC). The guy opened the bonnet and checked the behaviour of the compressor and said its probably less gas. He connected a gauge to the low pressure valve and got a reading around 50psi when the compressor had been off, and it went to around 30psi once the AC was switched on and started short cycling. He said the refrigerant is not low. He said maybe the engine is overheating causing the compressor to switch off.

So he opened the radiator cap to check the coolant and found it was full and looked good. No ‘Engine overheated’ light or ‘Check Engine Light’ on the instrument panel. He felt the pipes and said that the AC system seems to be fine and it must be some electrical fault. He asked if I had got any accessory installed like lights, horn etc. I replied that only the music system was installed around 15 years ago and no other accessory was ever installed. He asked me to remove the battery for the night and check the next day.

I did that and found that the same issue persists. I am yet to go to the shop again.

Any idea what can be the issue? Could it be a thermostat issue? or some relay gone bad? I also checked the drawing at oriparts to see there is a thing called a pressure switch. Could that be the culprit?

I searched on this forum and found some threads where either the AC stopped cooling completely or where the cooling went for a toss in afternoon or after driving for some time, in my case the issue crops up even on a cold engine when switched on in the morning (guess the temp of around 35C in the morning these days is cold for an engine). For the short duration when the compressor is on, it does its work and the pipes and the air from the vents gets a little cool. So my problem is diffrent from the issue mentioned here.

Here’s what BHPian Jeroen had to say on the matter:

There are a couple of things that can cause this, some of them can be checked easily. Make sure the cabin filter is not clogged, also check the air inlets to the cabin filter for debris,leaves etc. Check the condensers isn’t clogged. A dirty/ clogged evaporator can cause similar behaviour. Not sure how easy it is to get access to. In many cars that is a dashboard out job, although you might be able to get a peek at it via other means. This link could help.

Here’s what BHPian indianv2 had to say on the matter:

I had a similar issue with my DZire recently. Trying to isolate components one by one, here’s what was done overall:

If the above list has not been touched in your car, its a good place to start off with.

Here’s what BHPian SS-Traveller had to say on the matter:

The system appears to be low on gas, but the AC technician doesn’t seem to know his stuff. With adequate refrigerant, the low pressure end should be in the region of 50-55 psi while the compressor is running, and the high pressure end should show ~280-330 psi when the outside ambient temperature is 35-38 degrees C. Look up any car AC temperature-pressure chart on the Internet.

I would also suspect a leaking cooling coil, considering the car is 16 years old and had never had the cooling coil opened up / changed in all these years.

Find yourself another AC workshop in your city.