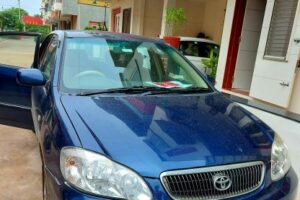 At the time of the sale, one engine mount was worn out & hence there were some vibrations in the 18-year-old car’s cabin.

BHPian vigsom recently shared this with other enthusiasts.

The blue Corolla that I once owned finally left the next owner after serving him faithfully for 9 years. He got approx INR 60k for the car, which was fair. In his period of ownership, the person who got the car from me had to do only the following:

Status on the day of departure Here’s what BHPian AKSarkar1 had to say about the matter:

This iteration of the Corolla is extremely close to my heart since it was the car I learned driving on. There is a reason why Toyota can charge a bomb on their current cars these days and people yet pay for it without batting an eyelid and that is due to the heritage that cars like the Corolla have left in India. Back in the day, the heart wanted a Blue Corolla but the head made us go with a white. Looking at these pictures got back so many memories!

Here’s what BHPian AJITHAAA had to say about the matter:

Looks like the last owner was cutting corners on all four ends. Bumpers have taken a beating.