1991 Chevrolet Cavalier Coupe Is Down On the Street 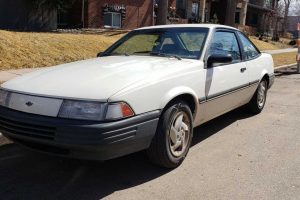 Way back when, in the days when Gawker—at the request of the late Davey Johnson—hired me to play hooky from my tech-writing job to write for Jalopnik, I lived in my hometown of Alameda, California, and discovered that readers enjoyed seeing the interesting old cars that lived on the street in that town. Thus was the Down On the Street series (inspired by the title of one of the greatest songs of all time) born. Some 14 years later, while walking the dog in my Denver neighborhood, I saw this ultra-rare GM J-body coupe and decided to bring back the DOTS name right here on Autoweek.

Part of the inspiration came a few days ago, when I learned that our own Jay Ramey read my Down On the Street posts while in his first year of law school. I’m not quite sure what happened next, but he now writes about a lot of interesting machinery in his Street-Spotted series. Some might say I’m a bad influence, and many would agree. Pay no heed to their vile calumnies.

The Cavalier lingered on until 2005, at which time it was obsolescent to an embarrassing extent, but the era of Peak Cavalier began in the middle 1980s and lasted through the early 1990s. I hadn’t seen one this nice for many years, and a coupe to boot? Time to revive Down On the Street!