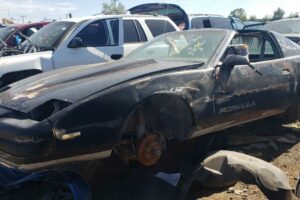 Pontiac has been gone for more than a decade now, and the 20th anniversary of the Pontiac Firebird’s demise takes place next year. Except for a brief period during the late 1970s, the Firebird spent most of its long career toiling in the shadow of its bigger-selling Chevrolet Camaro sibling, so I do what I can to find examples of the Pontiac F-Body as I wander the car graveyards of the land. Here’s a 1989 Firebird Formula, found in a yard just south of Denver last summer.

This car has the fragile 200R4 automatic transmission, which was a more popular choice for new-Pontiac buyers in 1989 but doomed it in the eyes of enthusiasts who might have opted to rescue this car. At least the Shrieking Pigeon emblems still look decipherable.

The T-Top roof option cost a sobering $920, which comes to just over $2,000 in today’s bones, or clams. That was just a bit less than the cost of the big GTA engine.