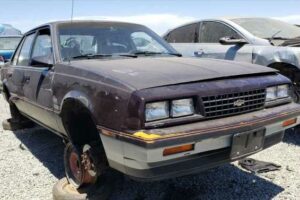 GM introduced the Chevrolet Cavalier to North America in mid-1981 (as a 1982 model), and it went on to a very successful near-quarter-century career. Nearly two million of the 1982-1987 first-generation Cavaliers rolled out of showrooms, but these cars all but disappeared from the face of the earth years ago and I have struggled to find a reasonably intact example for this series. Finally, I discovered this ’85 Cavalier CS sedan in a Northern California yard, and it even had the rare F41 Sport Suspension package.

The F41 package got you stiffer springs with fatter sway bars, along with better shocks and suspension bushings, and you had to order the meaty (by 1985 compact-car standards) P195/70R13 tires and power steering to get it in the 1985 Cavalier. You could get the F41 option on many GM cars during the 1980s, but I think only the Cavalier had badges bragging about it to the world.

A four-on-the-floor manual transmission came as base equipment on the V6 Cavalier in 1985, but this car has the optional $425 ($1,110 today) three-speed automatic. Sorry, you could only get the five-speed manual on four-cylinder Cavaliers that year.

The original buyer of this car didn’t stint on options to make long commutes more enjoyable. It sports air conditioning ($645, which was quite a bit costlier than the big engine), power windows ($270) plus this “Symphony Sound” four-speaker AM/FM/cassette deck with auto-reverse, AM stereo, five-band equalizer, and CrO2 tape capability. Just the thing for listening to your favorite Dead Milkmen tapes, and it cost a shocking 504 bucks (which comes to about $1,305 today and serves as a reminder to us about how spoiled we’ve all become by the excellent audio systems available as standard equipment in even the cheapest 2021 econoboxes).