1981 Honda Accord Sedan Is Junkyard Treasure 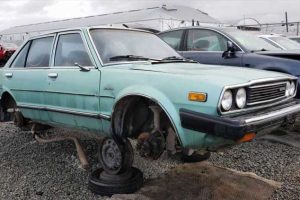 The first-generation Honda Accord was a genuine sales sensation in North America, with cars often selling for far above list price, but you won’t find many of them in car graveyards today; they rusted quickly in corrosion-prone areas and were driven to death elsewhere. Here’s a rare first-generation Accord sedan, spotted in a San Francisco Bay Area yard last year.

With a 1.8-liter four-cylinder engine making 72 horsepower, these cars sipped gas and tended to hold together very well in California. Most of them were used up by the dawn of our current century, though.

This Vacuum Hose Routing Diagram looks complicated, but these CVCC-equipped cars got terrifyingly complex under the hood once emissions standards tightened in the middle 1980s.

This car has just about every option an ’81 Accord buyer could get, including the two-speed Hondamatic transmission (which wasn’t really an automatic and sort of had three forward speeds). 1981 was the last model year that all Accords sold in the United States were built in Japan; production of the ’82s began in Ohio soon after today’s Junkyard Treasure hit the showrooms.