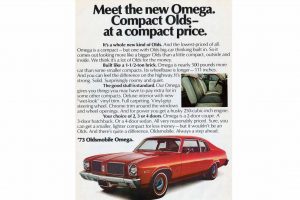 The General’s Chevrolet Division had a big sales hit with the third-generation Nova compact, introduced for the 1968 model year, and so Pontiac joined the party in 1971 by offering a Nova clone known as the Ventura. For 1973, Buick and Oldsmobile jumped in with their versions, the Apollo and Omega, respectively. This turns out to have been a prescient move, because OPEC turned off the oil taps in October of that year and American car shoppers suddenly wanted smaller, more fuel-efficient cars. Here’s a magazine advertisement for that first Olds Omega.

Since this ad came out in late 1972, when gasoline remained cheap, Oldsmobile’s marketers chose to emphasize the Omega’s large size and great bulk compared to, you know, lesser compacts. Fast-forward a year and you won’t see advertising touting a compact’s 500-pound weight advantage over the competition, nor will you see references to “husky” engines.