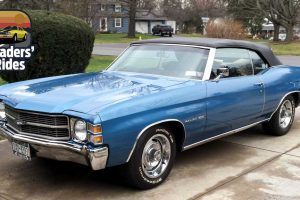 Want your ride featured on HOT ROD? Click here to find out how!

Funny things happen for those who actually lived through the muscle car era of the 1960s and ’70s, vehicles that now are revered as icons were then just another car. But somehow, Paul Acri found something special in his new GM A-body, a 1971 Chevelle 400 convertible, that made him hold on to it all these years.

“It was August 1970, and my wife and I finally settled on ordering a new Chevelle convertible and trading in our 68,000-mile red 1967 Pontiac GTO convertible,” Pall recalled, adding, “I never gave much thought to the icon vehicle we were trading in.” After waiting a long 17 weeks for the delivery of their new 1970 Chevelle (GM went on strike late in 1970) they finally picked it up January 11, 1971.

“The new Chevelle went right in the garage when we got home, and that is where it stayed until the inclement weather changed, Paul said. During that time, he told us, “We shared my wife’s car, which was a 1970 Chevy Nova.” Then, in April of 1971, the announcement was made that production would soon stop on GM A-body cars. With that knowledge, Paul ran out and picked up a used 1964 Chevelle two-door hardtop to take over daily driver duties. The 1971 Chevelle continued to be stored in the garage, only to be driven on special occasions and when the weather permitted.

“To make a long story short,” Paul began, “our Chevelle has remained a pleasure car only through all these years. And yes, we still own this beautiful car today. It will be 50 years old this coming January.” With the exception of a gauge pack, tachometer, AM/FM radio, and some aesthetic chrome in the engine bay, the 1971 Chevelle ragtop has remained entirely original. “Mileage on the car today is just 31,500 miles,” Paul proudly told us.

The future of the Chevelle is bright thanks to his son’s longtime interest in the car. According to Paul, “Our son Chris has grown up with the car, has driven it many times, and loves the car as much as we do. He is part owner of the car at this time, primarily as a function of my age. When something happens to me, I wouldn’t want anyone else to own it but him.”