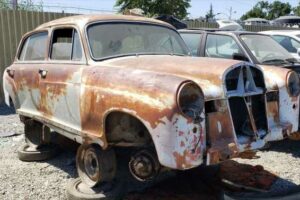 Mercedes-Benz didn’t start using the E-Class designation until the 1993 W124s, but you can trace the ancestry of that car back through its W123, W114 and W110 predecessors and arrive at the great-great-grandaddy of all E-Classes: the W120. This was the first of the postwar Mercedes-Benzes to sell well in North America, with sales beginning in 1953 and continuing through 1962. I found this ’59 in a San Francisco Bay Area self-service yard last month.

This car is really a W121, because Mercedes-Benz opted to use a slightly different chassis identifier for the cars with the 1.9-liter engine instead of the 180’s 1.8-liter plant. Whatever you want to call it, this one is a not-so-rusty example with an interior baked crispy from decades in the California sun, a very interesting car but not worth enough to merit a serious restoration. An absolutely beautiful ’58 190 went for $20k last year on Bring a Trailer, and today’s Junkyard Treasure would cost nearly that much just for pretty good body-and-paint work.

That said, it’s still sad to see a car like this destined for The Crusher. When I found this car, I hadn’t seen a junked W120 in a U-Wrench-It yard since 2010. Probably not coincidentally, this San Jose boneyard— famous among Bay Area junkyarders for the excellent taco truck in the parking lot— also gave us the highest-mileage Mercedes-Benz I’ve ever found in such a place.

Only one transmission was ever made available from the factory on the W120/W121, and that was a column-shifted four-speed manual. Yes, while most American cars of the time used three-on-the-tree manual rigs, the original E-Class had a sporty four-on-the-tree setup. Mercedes-Benz never used a five-on-the-tree column-shift manual transmission, but Renault, Alfa Romeo, Nissan and Toyota did so for a time.

The Prince Motor Company in Japan license-built Mercedes-Benz four-cylinder engines prior to its 1966 absorption by Nissan, refining and modifying the design into the ancestor of the L-series engines that powered so many 510s and Z-Cars. That makes the disco-inferno Black Gold 280ZX a cousin to this sensible 190! 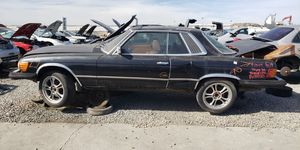