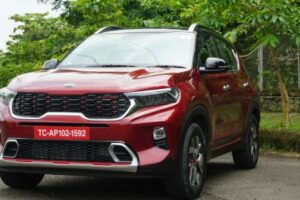 We also considered the Mahindra XUV300 but due to a couple of reasons, we are not keen on getting it even though it is a good car.

BHPian krishnakumar recently shared this with other enthusiasts.

I’m looking for a car at ~15L (max 16L) OTR for my first car ownership. While I’m new to car ownership, I’ve been driving cars for 10+ years now and have driven a variety of cars during this period.

The one-line requirement goes like this: “a car that’ll get us around comfortably on highways and broken roads for long road trips and weekend mall crawling with occasional city usage”.

The car will be primarily used by me and my wife (and hopefully a future dog) most of the time. However, we’ll have our siblings and parents visit us 2-3 times a year. Hence, the rear seat comfort, while not critical, is not to be ignored completely. I’m also expecting an annual mileage of 15,000km.

Some basic checklist features that I noted down based on the above:

The current cars under consideration are (in the order of priority):

Mahindra XUV3OO W8(O) – due to a lack of rear AC vent and poor boot space, we’re not very keen on this despite being a strong contender otherwise. This will be our only steed for a good time to come so we do not want to be in a position that makes us feel disappointed.

Used cars are a strict no from my wife.

I did the test drive for both Nexon and Sonet, both manual. Up until this point, I was mostly clear on getting the Nexon, however, with the test drive things kind of changed.

Important: The Nexon TD vehicle was at 18k on ODO and the SA mentioned that it was due servicing at 15K which wasn’t done. He also mentioned that there are issues with clutch and brake pads which are due for replacements. There was also a “low” warning on the Nexon TPMS for the left front tyre.

Performance: In the performance department, the Sonet clearly felt better than the Nexon. It got up to speeds quickly and I found it to have lesser turbo lag than Nexon. However, the Nexon SA mentioned that the lag is due to the clutch problem. I also found the Nexon engine to be very unrefined compared to the Sonet’s. Again, the SA mentioned that Nexon is due for servicing and the gravelly engine is due to that. I’m planning to take another TD for the Nexon, but I suppose the Sonet would still win in terms of refinement and overall performance.

Ride handling and dynamics: The Nexon was quite jiggly/bouncy at low-speed rides but rounded off bumps quite smoothly. No jarring movements on bumps or potholes. I found the steering to be a little too heavy even at low speeds and found it to be strange. I have driven the Nexon BS4 for ~1000km and never found it this way. The SA said the steering is like this – did they change it in the facelift? The Sonet again won this department, although the ride quality on broken roads was jarring due to the stiff suspension. Steering felt light enough for city movements but with reassurance. Couldn’t check if the steering weighs up nicely at higher speeds (since we were in city limits) but the SA confirmed that it does.

Interiors and Ergonomics: The Nexon and Sonet, both, had comfortable seating for the driver and rear seats as well. My wife said that the Sonet had far better interiors, quite obviously. She was also concerned with the cleaning and maintenance of fabric seats on Nexon. The Sonet, since it has ventilated seats, scored far superior to Nexon. My family calls me a polar bear – I start sweating even at regular temperatures for most people and hence, the ventilated seats is a very useful feature for me. Overall practicality of the cabin was also better in the Sonet. For example, there is no place to put your phone in the Nexon (apart from your own pocket – is it for more safety?). But I found it weird that the only spot to keep the phone was that cover for the cup holders – which means we can’t have both. Also, the phone wire would cross the gear knob and I found this to be an overall poor design. The small recess near the ports isn’t big enough for most smartphones these days. These aspects are much better designed on the Sonet. Another quirk with Nexon was that the gear knob was far too much in the front, such that I’d have to reach for it – but I’m discounting this as I’m sure I’ll get used to this in some time.

Safety: Now here is where the tables turn. We don’t know for sure how much the Sonet will score if crash-tested, but if we were going with anything that’s available as public information about the Korean twins, it is that the structural integrity is poor compared to the Nexon. While I know that the facelifted Nexon hasn’t been crash-tested, it can be reasonably assumed that the new car doesn’t have too many body changes and hence would score well.

While as per my test drive the Sonet scores higher for both Performance and Handling, I’m not sure if this will hold up because on paper the Nexon has better mechanical fundamentals. I understand that it could be because the Nexon TD vehicle was due servicing and required a couple of mechanical replacements. However, even if I’m just considering the Sonet individually, its performance and handling satisfied my needs.

Both the dealers agreed to let me do the PDI along with their staff before the VIN registration and final payment, although both of them requested for the down payment to be done at the time of allotment (which I found reasonable – thoughts from BHPians?).

I’m fully confused and my constant bickering about this has made my wife lose her head. She’s saying pick anything and be done with it.

My brethren, kindly help me!

Here’s what BHPian zandot had to say about the matter:

As someone who has purchased a Kia (Seltos) and a Tata (Nexon EV) within the past year, I would urge you to consider the Kia as Tata after sales is a nightmare.

Kia also has their shortfalls in terms of their sales advisors riding high on their brand’s success – not give a damn attitude as their vehicles will sell regardless, their brand new service centers and after-sales are much stronger than Tata.

Also IMHO, Kia is a superior product in terms of the build quality.

Here’s what BHPian abhishek46 had to say about the matter:

Since the Nexon TD vehicle that you tested was a faulty one, I would strongly recommend that you take another Test Drive, at some other dealership.

You can consider the Venue as well. It’s the same as the Sonet, however, Hyundai after-sales is arguably better than Kia.

Also, since you are already nearing the 16 lakh budget, why not consider the Mid variants of Creta/Seltos Diesels?

Here’s what BHPian Mafia had to say about the matter:

Find a dealer who has a newer vehicle. Test ride in a couple of showrooms if required before you make up your mind.

Tata has a bad set of sales reps in my experience.

The after-sales service of both brands is struggling to keep up with the surging sales. Just today, I was reading about Tata’s struggles. Kia is not faring much better.

Not an easy choice to make if you are thinking a lot without test rides. See if you can meet owners in your friends or relatives’ circle. Rent them if available in Zoom cars or some such. I chat with random strangers if there is a chance to get a better perspective on traffic signals or parking lots.

Please do let us know of your choice when you do make it.