Home » Auto News » 12 Years On, The Veyron That Was Driven Into A Lake Is Finally Being Repaired

12 Years On, The Veyron That Was Driven Into A Lake Is Finally Being Repaired 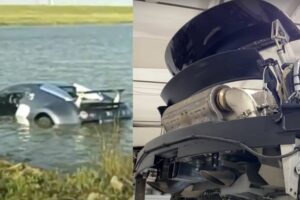 Back in the early days of YouTube, the above video was a viral smash hit. In it, a Bugatti Veyron was seen gently peeling off a road and splashing into a lake. It turned out to be an insurance scam, with owner Andy House claiming he was trying to avoid a low-flying pelican. Yes, really.

The 2009-shot footage proved the degree to which House’s pants were on fire, and it was reported a few years ago that he faced up to 20 years in prison, although he ended up only serving just over a year. As for the Veyron, its story only got weirder from its inglorious swimming lesson.

A dealer took advantage of the car’s clean title to secure a loan of $1 million to purchase and restore it. However, he went bankrupt, and the bank repossessed the Bugatti. Bizarrely, House was even back in the picture at one point to broker another deal. In 2019 the Veyron emerged again, listed in a disassembled state for $300,000. Entrepreneur and Cannonballer Ed Bolian was tempted to buy the Veyron, ultimately deciding it wasn’t worth the risk. As explained in his latest video, someone has since taken the plunge, and at last, the hypercar is on the road to recovery.

The buyer is Houston of Royalty Exotic Cars – no stranger to the world of independent Bugatti servicing and repairs. You might remember the establishment’s video detailing the complex process behind changing a Veyron’s engine oil, and another featuring a half-naked Veyron fooling around and making lovely noises.

Although there are few better placed to get the world’s most infamous Veyron back on the road in a cost-effective manner, this won’t be an easy job. According to Bolian, Bugatti isn’t awfully keen on supplying certain parts for the stricken car, and in any case, a lot of the new stuff is hideously expensive. For instance, due to how badly corroded it is, the Burmester sound system is shot and would cost one hundred thousand dollars to replace with new components.

There’ll no doubt be plenty of awesome videos detailing the trials and tribulations of this ultimate project car, which we can’t wait to see. Watch this space.