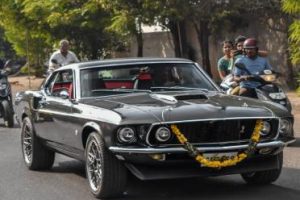 The 111 garage in Hyderabad has a unique and tasteful collection of cars. Since, this is a private collection, the exact list of cars is not known, but it is said that the entire family is into cars. So, there could be a lot more than those listed here. Unconfirmed reports also state that the owner’s father used to be a racing driver in the ’70s and ’80s.

You won’t find many modern Lamborghinis or Ferraris in this private collection. Instead, you’ll see immaculately maintained classic cars and some off-roaders as well.

Starting with the supercars, this garage has a Ferrari 360 Spider. Interestingly, this particular car is one of the few Ferraris in India to come with a manual transmission. It has a 6-speed gearbox. There is also a Mitsubishi Evo X. This car, known for its rallying pedigree, rides on BBS alloy wheels.

The classics in the garage include a first-gen Ford Mustang Mach 1, Jaguar XK 120, Porsche 930 911 Targa, Mercedes-Benz SLC 450, Rolls-Royce Silver Spur and a Volkswagen Beetle. The Jaguar was the fastest production car in the world during its time, and it is said that only 193 930 Targas were built.

The owner seems to be a fan of Bentleys too. There are two Azures, a Bentayga, an Arnage, and the new Continental GT Convertible in the garage. It is said that there could be another Arnage and Bentayga in the collection.

SUVs in the garage include a BMW X6 M, Toyota FJ Cruiser, Range Rover Autobiography finished in Santorini Black and a modified Toyota Hilux pickup truck. The Hilux was famously termed as one of the most indestructible vehicles in the world by Top Gear.

One of the most surprising cars in the 111 Garage is the London Taxi.