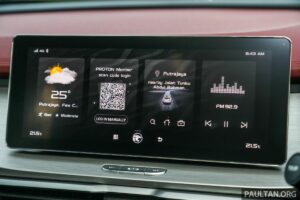 There are now 100,000 connected Proton cars in Malaysia as of May 2021, car connectivity technology and products joint venture ACO Tech said in a statement from chief executive officer Li Pu. Signed in June 2019, the joint venture between Proton, Altel Communications and ECarX saw the forming of ACO Tech in September 2019 to serve the connected vehicle technology needs of markets in Malaysia and in the greater Asean region.

In line with the milestone, the connected car technology firm has released an infographic briefly describing its users and the usage patterns observed. Across Malaysia, the male-female user split has been found to be 62:38, with around 80.3% of the 100,000 users fund to be active users. A total of 1.5 million “Hi Proton” voice commands were received by the system on a monthly basis.

Music playback was found to account for 43 minutes a day on average for its users, and this function was also the most commonly dictated voice command to the system; also in the top three most common voice commands were to “open radio”, as well as “open sunroof”. In terms of adoption rates by vehicle model, the X70 leads the table at 66%, followed by the Persona B-segment sedan at 18%. Third on the chart is the Exora with 8%, followed by the Iriz at 6%, and the X50 at 2%, according to ACO Tech.

ACO Tech has committed its research and development resources to the rolling out of eight over-the-air (OTA) software updates across different vehicle models since February 2020, it said. At present, the firm is developing an upgrade to the localised version of software that will bring more than 300 upgrades to the current iteration. This will be another step towards achieving a connected lifestyle that promotes safe driving, aids convenience as well as granting access to useful local content, ACO Tech CEO Li said in a statement.

The partnership between Proton and ECarX – who comprise two out of the three JV partners – began with the joint creation of the Global Key User Interface (GKUI) for the X70 in 2018, which then saw ACO Tech play a vital role in the localisation of Proton’s GKUI-based infotainment system.

This has been infused with ‘local flavours’ to better suit the preferences and and driving habits of local customers, said Li. Beyond Malaysia, localisation of the GKUI system also applied to the Thai market, where a Thai version of the infotainment system has been in development in preparation for the export of the X50 and X70.