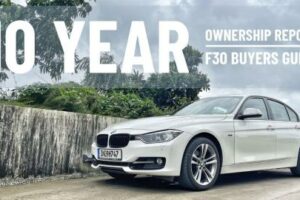 This German car is a fairly stable, predictable & reliable generation/chassis of the 3 series.

BHPian karan561 recently shared this with other enthusiasts.

Today, this BMW completes 10 years of ownership since the delivery day back in 2012. Like any car ownership which has its ups & downs, today as we are celebrating 10 years of this car’s ownership, I have charted out 5 things I love about this car & 5 things I don’t. A lot of ex-F30 owners too will relate to the above video and this can be a good buyer’s guide as well.

The F30 was born during an era when Turbo Petrols were taking over. The 328i in this case which has the N20 engine was solely responsible for making the 6 cyl non-turbo engines obsolete from the E90 era because with its 4 cyl turbocharged technology making this 3 series not only faster but more economical than the 6 cyl counterparts.

Overall complementing this engine was the stellar 8-Speed ZF Unit which really let the engines explore their true potential. I believe the E90s at that time, at least the early models, were running 6-speed ZF units. So yes the Engine-Gearbox combination is a strong Like.

The Suspension tuning was very good (to aid comfort over handling) in the F30 & this probably might be the most comfortable 3 series of all time.

Having experienced the E90 and also as I currently also own the E46, the space, especially the rear seat was tight, but in this F30 generation, BMW really freed up space for the rear passengers and made the 3 series a true family sport sedan.

Well priced for its time and was really a feature-rich package when I got it in 2012. Right from a 9-speaker system, which actually sounds as good if not better than the 16-speaker HK System I have in my M340i, features like the HUD, Memory Seats & large iDrive, which still is very intuitive for a 10-year-old system, all in all reiterating the fact that if you get the basics right then it’s easy to be timeless & that’s what this interior is all about.

The F30 is a great-looking car. Remember this was the 1st car in the BMW line up which had started the Headlight-Grill Integration design language. At the time there was no M-sport variant (finally it was introduced in the LCI) still the kit was really sporty and likeable without the need to enhance / mod the car cosmetically. The proportions continue to be sporty at the side as well as the rear. The Interiors too were really fascinating last decade and are still looking modern enough in today’s day & age. Style 397 rims (standard on 328i’s) IMO are one of BMW’s best designs & distinguishing my F30 from the sea of 320ds.

I know that in the likes I have mentioned the Suspension as a strong point for the Ride Quality, but the flip side is the handling takes a back seat & literally the rear suspension is to be blamed for that as it’s too soft and makes the rear bouncy on uneven surfaces which causes a lot of unpredictability. Hence this is one of the strong dislikes for me in this F30 generation of 3 series.*New owners (recently pre-owned purchases) should consider an upgrade. However, the facelift (LCI) cars were re-engineered to solve this to satisfactory levels.

My F30 had come equipped with GoodYear runflats at the time and those were touring spec. I personally feel that the generation of runflats of the last decade v/s the current gen runflats there is a huge difference. The rubber quality was hard, they were brittle and my setup being 18″ caused me a lot of trouble with side wall damages and tears. I had to immediately switch to a non-rft setup in which I had imported a staggering set of PSS and then currently I am running on a Yokohama Advan Sport (V105S) setup. My message to the new owners who are still on factory runflats would be to immediately switch to tubeless.

Out of nowhere, the F30 might just throw a “Drive train error / malfunction” and this is really scary to read on your iDrive or your cluster. I say this because the system has categorised all sorts of errors under the umbrella of “Drivetrain Errors”. Be it something like a rat bite or some boost-related issues or oxygen sensor etc. the error is common. Need a scanner to read the exact code. It would have been better if the system would have been more accurate in saying what’s wrong with the car other than just categorising all the errors into 1 which being ” Drivetrain Error” which sounds a lot serious.

Sticky Door Handles have been one ergonomic problem faced by most F30 owners. Common issue with other F Chassis cars like the F10 5 series as well.

The car eats up wheel speed sensors particularly if it’s having more hp / torque than the factory numbers. Also, these failures are most common during & post monsoon if you drive through heavy rain, mucky environments or also through dusty areas. The fix is easy (as the wheel speed sensor is just a wire gone bad) but expensive (at official BMW workshops) because they charge anywhere in the range of INR 9 – 12k / Wire. After-market shops charge around INR 3k – 6k depending on your rapport & the quality / brand of the sensor. Also, note that each wheel has a wheel speed sensor, it’s not a one-time fix.

To conclude things I’d like to summarise by saying that the F30 is a fairly stable, predictable & reliable chassis / generation of the 3 series. Not too many issues if you take care & have a good parking garage other than the ones mentioned / explained above. A decade done, many more to go…