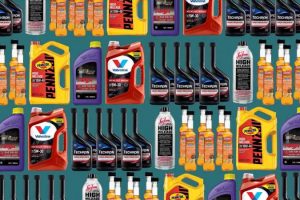 Cars last longer than they did just a decade ago. According to the Bureau of Transportation Statistics, in 2016 an average car lasted 11 years, up from eight years a decade prior. So, if you drive an average of 13,000 miles a year, that puts you well over six figures of mileage by the end of your car’s lifespan. Thankfully, there are a variety of products for oil and fuel to keep your engine running longer. (No matter what you use, remember to change your fluids often, keep your ride clean on the topside and the bottom, and take it easy on the hard starts, hard brakes, and violent turns.)

And if you don’t have a garage to work in, check out our list of free-standing carports here.

This additive from Sea Foam cleans your fuel injectors and lubricates other critical areas. It can be added to your oil to prevent common causes of oil consumption and to generally reduce engine wear.

This 5-quart jug of fully synthetic oil is made for vehicles with more than 75,000 miles on the clock. Castrol says it maximizes both short- and long-term engine performance and reduces leaks and burning oil.

Lucas High Mileage Oil Stabilizer is made to eliminate the noise, emissions, and oil consumption of older vehicles. It comes in one-, two-, and 12-bottle packs.

This 5-quart jug of high-mileage oil includes anti-wear additives along with detergents to protect against sludge and deposits. It also treats your seals and takes longer to break down than standard oil, even in harsh conditions.

This nonsynthetic oil is compatible with most vehicles and helps prevent sludge and other damage. It too is designed for vehicles with more than 75,000 miles.

This engine treatment goes in with your oil to revitalize seals and reduce oil consumption. It can be used with an oil change or in between and is compatible with all multigrade oils.

This fuel additive from Gumout fights ethanol and water corrosion and prevents future carbon buildup. It also conditions the upper cylinders to reduce friction and wear in high-mileage vehicles.

This cleaner from Techron protects the fuel system and sensors from corrosion and is compatible with all commonly commercially available ethanol blends. Techron claims it also helps increase fuel economy.

Mobil has one of the original high-mileage oils for cars with more than 75,000 miles. This six-pack of 1-quart bottles should reduce oil consumption, combat sludge, and prevent engine wear.